As a performing songwriter he has performed with or opened shows for the following artists: Shawn Colvin, Timothy B Schmidt, Graham Parker, John Gorka, Charlie Musselwhite, Joe Ely, Greg Brown, Mary Lou Lord, Steve Forbert, Bill Morrissey, Big Twist, and Cliff Eberhardt.  He’s performed at the Greenwich Village Folk Festival, the Udine Folk Festival in Udine, Italy and has toured five times in Europe. He also played bass, guitar and sang in the Shawn Colvin Band for a number of years and often performed with Shawn as a duet.

He previously taught songwriting at Foothill College and at the Freight and Salvage in Berkeley.

I'll be performing in the Madame Guitar Festival in Tricesimo, Italy north of Venice. Madame Guitar is one of the most famous acoustic guitar festivals in Italy. It has been held since 2006 on the 4th weekend of September in Friuli, in Tricesimo (4 km from the Udine Nord motorway exit) and has seen the participation of some of the greatest international interpreters of the six strings. 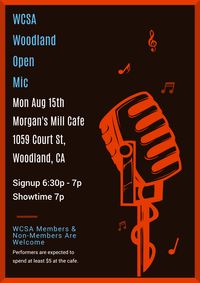 I'll be hosting the West Coast Songwriters Open Mic. Come on out and do a song! Members and Non-Members welcome. Performers are expected to spend at least $5 at the cafe. 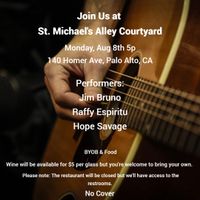 Please join us for a performance by Jim Bruno, Raffy Espiritu and Hope Savage. BYOB and food. If you prefer, you can purchase wine for $5 per glass. The restaurant will be closed but we'll have access to the bathrooms. No Cover.

I'm excited to be a part of the Greenwich Village Folk Festival! It will be happening online. Details to follow.

We love performing at Valerie and Tom's House Concert. We have a blast everytime.

I'm looking forward to performing in one of my favorite Chicago Area venues with Mark Soljacich on lead guitar and Brian Sandstrom on bass. We often have special guests sitting in so don't miss this one!

Looking forward to performing with my good friend and outstanding songwriter, Maurice Tani!

I'll be the new host of the West Coast Songwriters Open Mic! Live music is coming back. All folks are welcome; members and non-members. There's no cover. This is not a competition. Let's all get together and share the songs we've been working on during this pandemic. See you then!

This Saturday at 7pm there will be a virtual concert for Josie's Place, a great local non-profit. I'll be the MC and will perform along with 8 other outstanding performers.

You can access the benefit concert at that time on my Facebook Page at https://www.facebook.com/jim.bruno.98 For those of you not on Facebook, don't worry, I will also send out a YouTube link via email, also at that time.

Josie’s Place is a local non-profit that provides support in a safe and caring environment, to children, teens, and their families in the San Francisco Bay Area who are grieving a death of a family member or friend.

I hope you can join us on Saturday!

Looking forward to a great night of music and laughs with my good friends; Carol Denney and Hiram Bell!

I'll be performing from 5pm to 7pm at Amado's. My good friend, Marty Atkinson, will be helping me out on guitar. No cover.

Looking forward to performing with Paul Griffiths and George Kincheloe. Both outstanding songwriters.

BEATLES NIGHT COMING UP ON JANUARY 11th! Coming up on January 11th at Amado's in San Francisco, Beatles Night for Josie's Place, a local non-profit that helps young people and their families to cope with grief. We've got ten great performers each doing two Beatle Songs including Wendy Beckerman, Karen Almquist, Dennis Fleming, Maurice Tani, Dennis Juarez, John Palme, Chris Jefferies, Mick Shaffer, Paul Griffths and me. We did this in September and it was so much fun that we had to do it again! Come on out and have a great time for a great cause. Amado's is at 998 Valencia in SF. Showtime is at 8pm. You can but tickets here https://bpt.me/4457305

This one's going to be fun! Marty Atkinson and Scott Beynon are both fine songwriters. Marty and Scott both play in the Atkinson, Kincheloe, Beynon Band.

I'm looking forward to being a special guest for Paul Griffiths' CD Release Show at one of my favorite venues. The Lost Church.

I'll be joining two great songwriters; Maurice Tani and Carl Solomon. Maurice is a local favorite and Carl's coming in from Portland. Don't miss this one!

This is going to be a very special night. Ten performers each doing two Beatle Songs and all of the money going to a great cause...Josie's Place, a non-profit organization that helps young people deal with grief. Please come! You'll have a great time and you'll be supporting a great organization.